Use of NasalCrom in Allergy 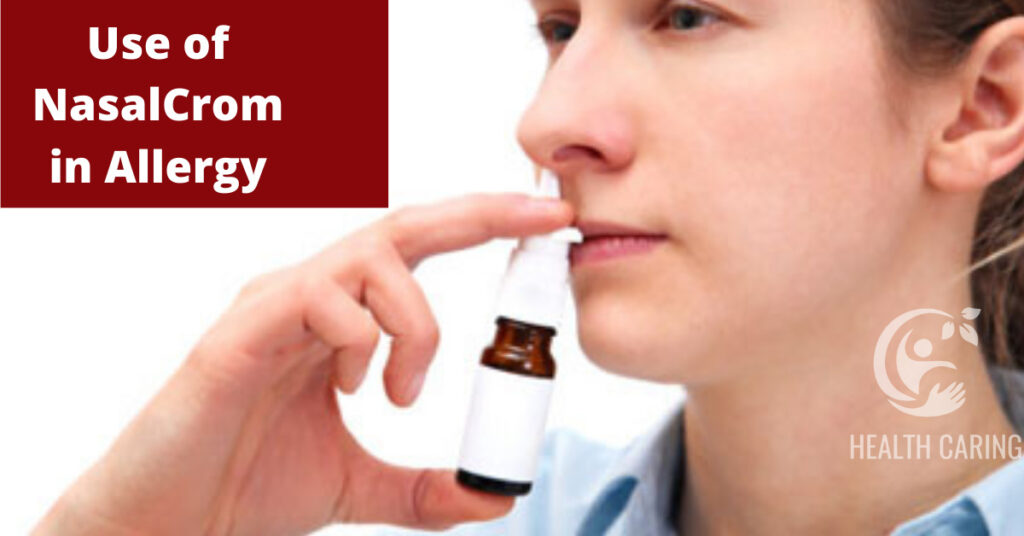 NasalCrom is an intranasal, mast cell stabilizer that plays an important role in the treatment and care of allergic rhinitis. Before going into detail about the medication, we should know about the disease.

The symptoms of allergic rhinitis are as follows:

People will experience one or all of these symptoms when suffering from allergic rhinitis. Some people experience these symptoms severely than others. The most important thing to remember is that fever is not a symptom of rhinitis. If you have a fever, consult your doctor as it might be a viral or bacterial infection.

When an allergen comes in contact with the body, the body releases a chemical called histamine that protects your body from allergen and in turn causes allergic rhinitis.

Histamine is found inside the mast cells. Mast cells are a part of the immune system and neuro-immune system. During an allergic reaction, the pollen activates the mast cell, and histamine is released. Allergen binds to the IgE that is coated upon the mast cell surface. It should be noted that mast cells only activate when two or more allergens bind to IgE.

There are two types of allergic rhinitis:

Many risk factors exaggerate allergic rhinitis. Asthma and Eczema being the main factors, but there are others such as:

Many tests are performed to plan a good treatment plan for you by the doctor.

The most common test is Skin Prick Test. This test is easily done and mostly accurate. The doctor or physician will put the different items on your skin and then look for any skin changes. A small bump may appear if you are allergic to that substance.

If your symptoms are not severe, then opening the window and wearing a mask will be enough for you to prevent an allergic reaction. The use of a dehumidifier is seen to relieve symptoms of allergic rhinitis considerably.

Many home remedies are being used for the treatment. These remedies are good for many people, but allopathic medicine is playing an important role.

Antihistamines relieve many symptoms of allergic reaction. Antihistamines can subdue hay fever, conjunctivitis, and reaction to insect bites. These medicines are easily available in pharmacies. There are two types of antihistamines:

Mechanism of Action of Antihistamines

Antihistamines are available in oral dosage form and ophthalmic dosage form. Before taking any medication, consult your general physician or ask the pharmacist.

Decongestants are being used in allergic rhinitis to treat stuffy nose. They should be used for a shorter period. If used for a longer time, they can worsen the symptom. For example:

The side effects of cromolyn sodium are as follows:

These side effects are more or less tolerable. If the situation worsens, immediately call your general physician. Cromolyn sodium falls under category B drugs to use during pregnancy.

NasalCrom is a mast cell stabilizer. It is available in the form of an inhaler. The dosage is three to six days per day. It is effective if taken before the allergic reaction begins. The medication works best before you get exposed to an allergen. It is recommended to use this medication as per the advice of your physician. Do not try to self-medicate. The full effect will be shown after four weeks, so it is recommended to take the medication regularly and continually.

Although NasalCrom is proven effective in the treatment of allergic reactions. One should use it with caution and per the advice of their physician. In case of any side effects, contact the physician immediately. If NasalCrom does not suit you, you can take cromolyn sodium in oral form.