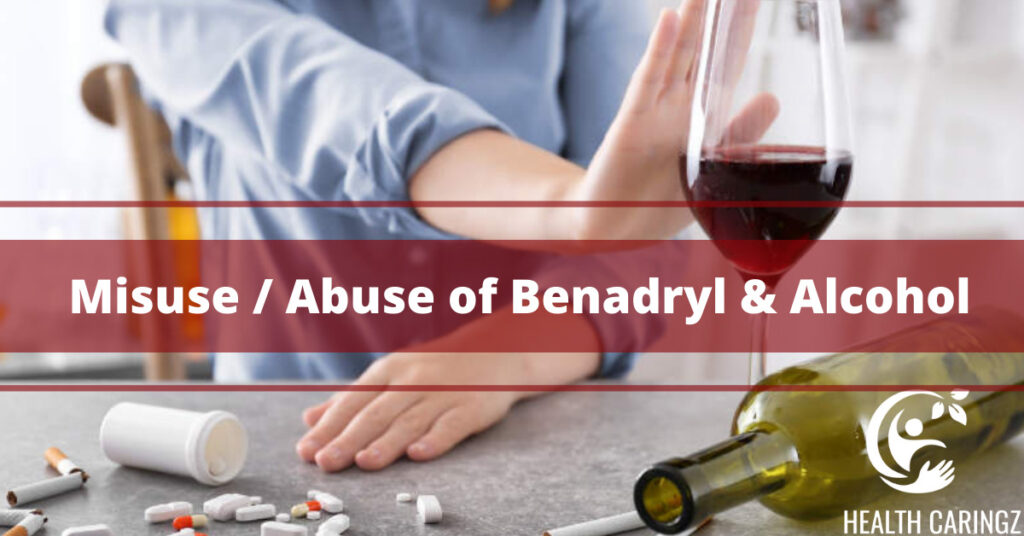 There are many ways mixing of Benadryl and alcohol can lead to serious repercussions. This article will discuss some of the reasons that the mixing might lead to drug abuse. Before divulging into the abuse, let’s see what Benadryl is.

Benadryl is easily available at the market. Benadryl can be used for the relief of many symptoms that cause allergy. These symptoms include:

Benadryl provides relief from all of these symptoms in record time. It is also an over-the-counter drug; therefore, many people can procure it from the local Walmart. Children under the age of 6 shouldn’t take this medicine. It has not shown any promising results in that age group.  Before taking the product, you should consult your general physician or pharmacist.

How to Take Benadryl?

Benadryl can be given orally in syrup or tablet form. It can be given with or without food. Dosage should be given according to the instructions given in the leaflets or the dosage prescribed by the doctor or pharmacist. To measure the dosage of the syrup, there is a cup available inside the packaging.

The point to note here is that antihistamine, specifical diphenhydramine, can cause drowsiness and sleep.

We all know what alcohol is, but not how does alcohol work.

Now that we have established that Benadryl and alcohol both cause drowsiness. Let us see what other effects can happen by mixing these two.

There are many disadvantages of mixing alcohol and Benadryl. We will discuss some of the risks here:

Histamine is responsible for the wakefulness of the body. When we take diphenhydramine, it inhibits the release of histamine, thus causing drowsiness. Alcohol has the same effect by increasing the levels of GABA transmitters. When taken together, the inhibition increases, at least, two-fold. This increase in sleepiness can cause serious effects. Driving while taking these two together can cause accidents.

Dehydration is a serious risk. Alcohol causes dehydration by suppressing the enzyme vasopressin that is involved in the water reuptake from the kidneys. This will increase the dieresis effect and therefore cause dehydration. Antihistamines have a drying effect. This effect is great for the watery eyes symptom caused by the allergy, but it also dries out all other fluids in the body. Dehydration is divided into three stages:

The Benadryl and alcohol mixture causes severe hydration. Dehydration can cause many diseases such as:

Alcohol directly affects the development of the brain. This is why it is prohibited for females to drink alcohol during pregnancy. Alcohol not only affects development but also it also impairs learning ability.

The combination of these two will wreak havoc on the learning ability of a healthy human being.

Benadryl is an anticholinergic as well as an antihistamine. A study found out that people who took a pill of anticholinergic drug per day for three years had a higher risk of developing dementia.

Another study found out that alcohol also causes dementia. The combination of these two can cause dementia to develop quite early.

As the human body gets older, many organs start to function slower. This causes many things to happen. When an older person consumes alcohol, it remains longer in the system because the breakdown of alcohol slows down.

The combination of Benadryl and alcohol is quite lethal in older men and women. Memory impairment is a serious side effect, and in old age, this effect increases ten-fold.

Benadryl and alcohol together are not a good choice. It is hazardous to health and can even cause many life-threatening accidents. Many adverse side effects can occur by a combination of these two. When a patient is prescribed Benadryl, the doctor or pharmacist explicitly asks the patient not to indulge in alcohol while taking the medication. You should abstain from alcohol while on antihistamine treatment. Not only alcohol but also abstain from all other sources of alcohol.