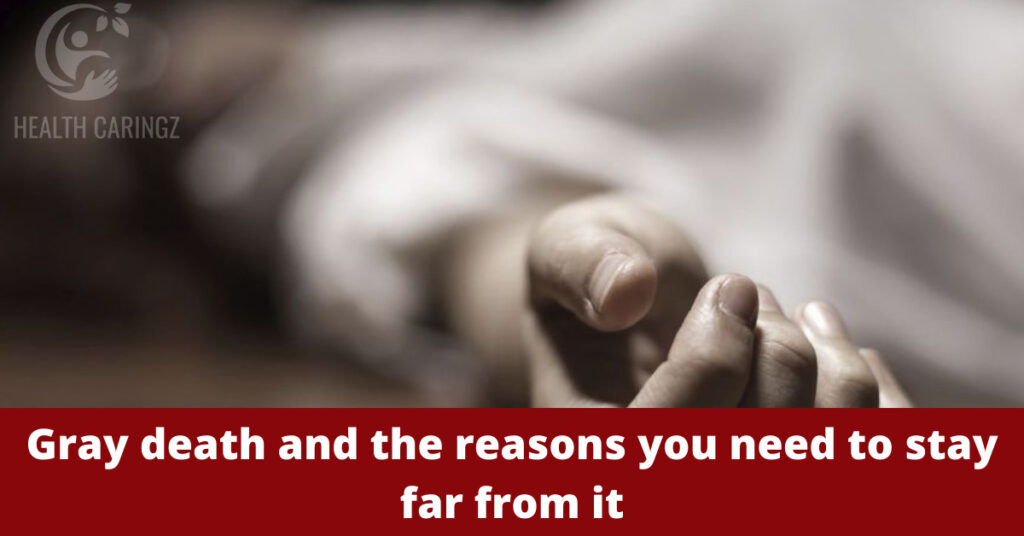 Gray death is one of the potent opioid combinations used for addiction purposes. Addiction with the introduction of new addictive drugs is becoming more and more common. Such addiction to drugs wouldn’t only make your life hell but also take you to an early grave. Whenever a medication is used for the addiction purpose will end up ruining your health quality of life altogether.

Some medicines are so addictive that even a tiny intake of them will leave you wanting more. Severe withdrawal symptoms of this drug stop people from ever quitting this addiction. But help is always there for people who need it.

As told earlier, gray death is a mixture of opioids.  The gray death is a gray powder with chunks in it, and it is basically because of mixing several different drugs. There is no exact combination of drugs that are used in the gray death. The choice of drugs is entirely random, and that makes it even more dangerous for the people. This drug can be taken either by mouth in the form of a pill or powder.

The other way it can be used is via injection. This drug is also snorted and taken by smoking a rolled-up cigarette. This substance was first found in America, where few deaths due to this drug were reported. It happened with the confiscation of this drug in different states of America. This drug also has a relatively high death rate and is even more dangerous than heroin.

What is in gray death drug

Gray death drug is one of the dangerous drugs because you won’t know which combination of medication is present in it. It is said that the gray death drug has some of the potent opioids along with any other medicines that the drug dealer has on hand. But the drugs that are usually found in the gray death are a follows.

How dangerous is gray death?

Due to the reason that its chemical composition is completely unsure of, it becomes one of every dangerous drug. In the case of overdose, it isn’t easy to deal with. This drug can be so lethal that some deaths or medical emergencies were reported just by touching this drug. The health care workers and paramedical staff is strictly warned against touching thesis drug for the very same reasons.

The presence of Carfentanil makes it very lethal. The Carfentanil drug is a string tranquilizer for animals like elephants, and a minimal dose of it can cause death. It is reported in some cases, and even gloves are not enough to protect you from the harmful effects of these drugs. Carfentanil alone is 10,000 times more potent than morphine.

Effects and side effects of gray death

The gray death use can give the user a feeling of joy. Patients feel high with the help of this drug and are In a euphoric state. But there are much more side effects of this drug. A following are some of them

With the use of the gray death drug, the individual will feel more cravings towards it, and the need to increase the dose will be experienced. It is never too late to get help if you want to quit using gray death. Withdrawal symptoms will be there, but in a hospitalized setting, this can be managed.

The drug is slowly tapered by decreasing the dose every other day. This way person will be finally able to quit the use of gray death. Proper counseling is also needed during the withdrawal treatment of gray death because a person can become mentally attached to the drug itself.

If a person is new to this drug, even a tiny whiff or touch of this drug can create a medical emergency or death. People who are already using opioids are the ones that can use the gray end. Overdose of gray death is still common because most of the time, the user doesn’t even know what drug dealer has added in the combination and how potent it is. The majority of people end up having lethal overdose even with using a minimal amount of this drug.

In case of overdose, the one medication given to save the life of the patient is naloxone. Naloxone is a drug that acts on the opioid receptors in your body and reverses the effects of opioids that you have taken. This way, a patient’s life can be saved from the worse side effects of opioids themselves. Naloxone is available by the brand name Narcan, and it is available in two dosage forms. One is the nasal spray, and the other one is a shot.

Naloxone resistance can be developed by the patient who has used gray death. Naloxone is an opioid antidote. It will only help save the patient from the harmful effects of opioids. But in gray matter, as we know, a combination of drugs is present.

At that point, naloxone will not affect the benzodiazepines, barbiturates, cocaine, and other non-opioid medications. Finding out the exact combination is significant if you want the person to be saved from the adverse effects or overdose of the other drugs present along with the opioids.

It is better to stay as far away from all the addictive drugs as possible because gray death is the roof of what drugs can do to you. For the sake of money, drug dealers are creating more and more addictive drugs that can be lethal.